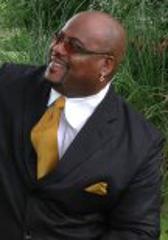 Alonzo Reid is a native of Montgomery, Alabama. He was inspired by his mother at the age of six to play drums, and was taught well by Gospel legends such as The Brooklyn Allstars of Brooklyn, NY and the Swan Silvertones of Pittsburg, PA.

Alonzo played for several local groups around Alabama before going on the road with the Pilgrim Jubilees of Chicago, IL. He had the privilege to play behind many great gospel legends such as Shirley Caesar, Dorothy Norwood, The Mighty Clouds of Joy, The Soul Stirrers, and Aretha Franklin before crossing over to Rhythm and Blues in 1997.

Alonzo played drums and percussions for fourteen years with the late great Marvin Sease (The Candy Licker). He has also played for Bobby Womack and Mel Waiters for a number of years. The opportunity has now come for him to step out into the for-front, releasing his very 1st CD titled "Undercover Freak". The second CD released was "Striving 4 Perfection" and it also is showing to be favored by Alonzo Reid fans. Alonzo now gives to the world more hot singles as he is preparing for the release of his most recent  project, "Unpredictable".

Since Alonzo has become an artist, he has had the privilege of opening up for some great legends such as, Bobby Womack, The OJays, Doug E Fresh, The Manhattans, Bobbie "Blue" Bland, Ray Goodman & Brown, Gladys Knight, The Temptations, and many others. Alonzo Reid shows consist of catering to the ladies with his dynamic smooth, and soulful voice. His style of singing takes the ladies on a journey where they have never gone before. Over the years Alonzo's shows has been labeled by some people "for the Grown and Sexy folks," rated "X."; However, Lately Alonzo has been labeled one of the sexiest soulful crooners of modern times.

He is steady climbing the charts with ballots the "Undercover Freak" album like, "Can I", "Hooked On Your Love", "Whatcha Want Me 2 Do", and "Wanna Make Love 2 U". Favorite songs from Alonzo's "Striving 4 Perfection" CD include, "I Tried", "3 Wishes", "I'm Having A Party", Your Loving Is So Good", and "Your Tongue Alone." Alonzo's show is electrifying and full of energy. And, it includes a dynamic tribute to "Marvin Sease" whom Alonzo worked with for more than fourteen years. Once you have seen his show, you will become an "Alonzo Reid|" fan for life.